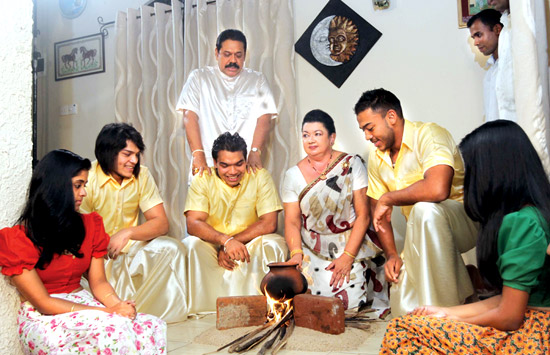 What a lovely photo of Sri Lankan President Rajapaksa’s family that appears in the country’s Sunday Observer newspaper today. I wonder if they drink Tamil blood with a glass of red wine.

As the UN releases its report on Colombo’s murder of tens of thousands of Tamil civilians during the country’s civil war – and yes, there are profound issues with the UN investigating itself when there are serious questions about its own alleged complicity in failing to act to protect civilians – Sri Lanka’s largely pro-state media is going into overdrive.

“The World’s Sixth Most Influential Personality. Isn’t the ideal New Year gift for the leader for his astute political leadership?”

President Mahinda Rajapaksa, who proved that nothing is impossible if there is a will and dedication, bridged the gap between the once divided two communities Sinhala and Tamils – and received the prestigious New Year gift the day after the Sinhala and Tamil New Year.

A poll conducted by the US based magazine TIME – listed President Mahinda Rajapaksa as the sixth out of 100 most influential persons of 2011.

It is a co-incidence where that on the same day the UN Secretary General’s panel, which released its final report on the alleged war crimes during the final days of the end battle against the LTTE in May 2009, drew attention to the government’s accountability in handling the end battle.

According to sources close to President Rajapaksa, the intention of featuring him in the TIME polls was to create a negative image of him.

It is shown clearly in the brief introduction of him, which states: “Since ending Sri Lanka’s 26-year-long war against the Tigers in 2009, and grabbing control over once independent institutions such as commissions on human rights and elections, Mahinda Rajapaksa has come to dominate the institutions of his nation more than any other democratically elected head of State.

He challenged the US., the European Union and the UN to prosecute him for war crimes, confident that Russia, China and India would not support it, the latter two have billions of investment at stake in Sri Lanka.”

The sources said the pro-LTTE Tamil Diaspora led a secret campaign to make him unpopular to rank him at the lowest position. But, the patriotic Sri Lankans, including the Tamils who were convinced of his endeavours to liberate the country from the clutches of the LTTE terrorism, had voted for him to defeat the pro-LTTE elements.

Being the very first Sri Lankan leader to be featured in TIME magazine’s 100 Top Ten, he reached the sixth position ahead of all powerful and popular figures of the world including famous WikiLeaks creator Julian Assange, who has been ranked 11 in the polls.

Ranking as the sixth among the 203 personalities is not only his personal achievement but a victory for the country itself.

This has endorsed his commitment to eradicate terrorism and also drive the country towards a peaceful new era in the aftermath of a deadly battle against terrorism that plagued the country for nearly 30 years.

And this editorial about the nation’s glorious economic growth. Message to the world? Stop bugging us about these war crimes distractions and murder of civilians; we just want to talk about jobs!

Sri Lanka last year registered its second highest economic growth since independence and the highest in 32 years, according to the 2010 Central Bank of Sri Lanka (CBSL) Annual Report. The CBSL report released on New Year’s Eve was indeed a welcome sign and an indication that the country is marching triumphantly towards further economic prosperity.

Based on the impressive economic indicators achieved during the past few years, Sri Lanka could well consolidate its position to become the ‘Wonder of Asia’ sooner than later. Moreover, the New Year will help bring about a renewal in spirit and fresh expectations.

The Sinhalese and the Tamils all over the country are still in an exuberant mood enjoying the New Year festivities as never before. The peaceful atmosphere to enjoy the New Year in its true spirit sans any fear and security concerns was made possible only after the country achieved its true freedom after the Security Forces freed the country from the clutches of LTTE terror in May 2009.

With the successful economic growth and the people getting about freely for the New Year celebrations, we recall the immense sacrifices made by the Security Forces in vanquishing the LTTE terrorists.

All these superlative achievements have been made possible due to the right economic policies implemented under the Mahinda Chinthana. Political stooges who expressed reservations on the President’s ability to manage the economy in 2005 had to eat humble pie eventually.

President Rajapaksa has laid the foundation to take Sri Lanka towards new economic horizons. It is abundantly clear that Sri Lanka could achieve double digit economic growth if the right economic policies introduced under the Mahinda Chinthana are maintained under the President’s illustrious leadership.

BDS gets noticed by Murdoch press

Chomsky on what should happen to Haiti right now