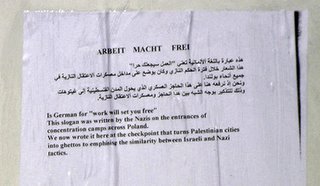 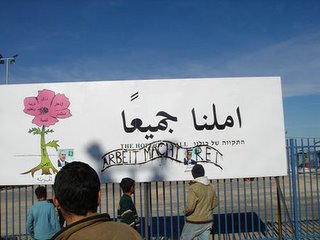 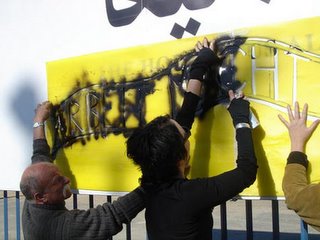 The following statement has been issued by “Jews Against Genocide“:

“On January 19th we, a group of concerned Jews, spray painted the infamous Nazi slogan ‘Arbeit Macht Frie’ (‘Work Makes You Free’) on a sign placed by the Israeli occupation authorities at the Kalandia checkpoint that read ‘The Hope of Us All’.

“The Sign ‘The hope of us all’ and the New Ramallah Terminal were inaugurated on the 20th of Dec 2005. The new terminal is set up so that there is no physical contact between the soldiers and the Palestinians. The soldiers scream commands to the Palestinians over loud speakers as they are made to go through a series of electronic gates and turnstiles. The new Terminal embodies the occupation in its alienated, bureaucratically cruel form. It is situated between one Palestinian area and another and flanked on both sides by the annexation barrier effectively turning Ramallah into a ghetto.

“‘Arbeit Meicht Frie’ was written at the entrance of Auschwitz and other Nazi concentration camps. In spray painting on that sign we did not mean to say that Ramallah is Auschwitz. We did, however, wish to point out that there are many disturbing parallels between the tactics used by the occupation and those used by the Nazis. For example, the attempt to beautify dehumanising institutions through empty phrases like ‘The Hope of Us All’ and ‘Arbeit Macht Frie’. We believe that it is important to heed these disturbing parallels as warning signals in order for another Holocaust never to happen again, to any people. We wrote a paragraph explaining our action in Arabic and English and distributed it to people as we were painting the sign, and we posted that paragraph next to the slogan.

“Unfortunately the Israeli authorities have decided to use our action for their own purposes and are accusing the Israeli human rights group Machsom Watch of ‘defacing the checkpoint’. (See Kalandia terminal crossing compared to Auschwitz by Margot Dudkevitch.) These accusations are baseless. None of the people involved in writing the slogan have anything to do with Machsom Watch. The Israeli Military is attempting to find excuses to deny witnesses access to the checkpoints where human rights are systematically violated.”

Read this for a typical example of how checkpoints are destroying Palestinian lives and the “security fence” is harming both Israelis and Palestinians.