My book, Disaster Capitalism: Making a Killing Out of Catastrophe, was released in 2015 (and it’s out in paperback in January 2017). It received many reviews and the latest is by Dr Jason Von Meding, an academic in Australia:

The US Presidential Election is in full swing. Over the next few months, Donald Trump and Hillary Clinton will go toe-to-toe in what is already a less than clean scrap. In amongst the media and social media hysteria (on both sides), one could be forgiven for missing an intriguing narrative espoused by alternative voices that opts, rather than criticizing one candidate over the other, to reject both the neoliberal status quo and reactionary neofascist agendas that are the product of unfettered predatory capitalism.
In… Disaster Capitalism: Making a Killing out of… Catastrophe, acclaimed Australian journalist Antony Loewenstein turns his passion for justice to deliver a stunning critique of the thriving disaster capitalism industry, in its many forms; the profiteers of privatized detention, militarized security, the aid industry and multinational mining are relentlessly skewered with style and poise, and their predatory tactics exposed. According to his narrative, Hillary Clinton is exactly the kind of neoliberal hawk that enables neofascist demagogues like Trump to rise, and allows predatory ‘businessmen’ like Trump to prosper. Both Presidential candidates are indeed invested in disaster capitalism, but Loewenstein’s tale is arguably one that focuses on the Hillary’s of the world; the trusted and experienced hand; the status quo; the Establishment. 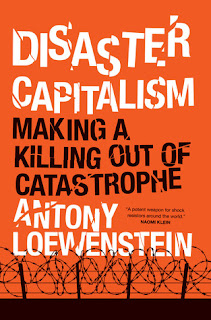 The overwhelming message is that simply outsourcing your cruelty is a convenient way to avoid responsibility, transparency and accountability, while profiting corporations and manipulating the economy. Neoliberal governments would like us to accept the notion that corporations are ultimately benevolent entities that exist only to employ people, satisfy market demand and grow GDP. Loewenstein argues that “multinational corporations spent the twentieth century gradually reducing their obligations in the various jurisdictions in which they operated.” (p. 243) What we have now is unregulated, unaccountable and secretive private sector entities. Meanwhile, governments with dirty work to outsource are not left disappointed.Unfortunately, a willful ignorance of the sometimes devastating social impact of ‘business’ has allowed a mentality of self-righteousness to fester, completely detached from the suffering of people that stand in the way of profit, those targeted by governments for suppression and oppression, and the unfortunate citizens of countries outside of the US circle of trust, whose lives appear to hold so much less value than those of allies. Companies like DynCorp and Blackwater, despite having their abuses repeatedly exposed, thrive in this context.

A Rigged System
Loewenstein exposes, time and again, the fact that the global economy is dominated by anti-democratic and predatory forces that profit the wealthy and the ruthless. The revolving door between corporations, lobby groups and government is clear for all to see.… This collusion between powerful actors fans the flames of crisis while selling market fundamentalism as the antidote and positioning… ‘benevolent’ corporations to reap the benefits. In the U.S. the banks were bailed out while personal debt, and indeed poverty rates, soar. Loewenstein offers a stinging critique of a system rigged for the 1%, and the scandalous truth that in the US both major parties represent similar corporate interests while the media feigns ignorance. Indeed, liberal presidents have done little for the vulnerable other than make empty promises.
Meanwhile, in Haiti, Loewenstein describes an environment of “canny capitalists sifting through the ashes of a disaster, looking for business opportunities.” (p. 109) His narrative of this historically vulnerable nation describes the strong 20th Century American support for successive brutal dictatorships, enriching U.S. interests and a local elite. We see this model replicated again and again in… Disaster Capitalism, and indeed around the world as a key element of U.S. foreign policy. The example, in chapter 3, of the “devoutly anti-Communist” ‘Baby Doc’ Duvalier is particularly damning, who, “unlike the many African despots targeted by the Hague, remained a friend of the West and was therefore largely untouchable.” (p. 110) When the neoliberal agenda was challenged in Haiti by Aristade, the U.S. and local elite conspired to overthrow the government to restore ‘order’.
We are often presented with the assertion that the international community, led by U.S. humanitarianism, rescued Haiti after the 2010 earthquake. Loewenstein paints a very different picture, and claims that “when Haiti had received lashings of ‘help’ this generosity had done little but enrich foreign companies.” (p. 115) The local reception to UN … intervention was largely hostile. In the context of historical US interventions in Haiti this comes as no surprise, and the sentiment is well founded. As revealed by Wikileaks, the US ambassador to Haiti asserted that the UN military-style solution was “an… indispensable… tool in realizing core [US government] policy interests in Haiti” (p. 115)
In a similar vein, most development aid to PNG from Australia since its independence either found its way into the pockets of either the wealthy PNG elite or Australian corporations. Far from its claimed humanitarian ideals, Loewenstein says that the main goal of the Australian government in PNG was simply, “to ensure that Australian corporations had a ready market in which to turn a profit.” (p. 172) The denial of complicity with oppressors in the violent struggles of the 1980s and the patronizing attitudes displayed by Australian diplomats leaves a bitter taste.
Loewenstein reserves some of his harshest criticism for the mainstream media, and the… “false construct of “balance” that permeates the corporate press, which merely pits one powerful interest group against another”… and one that… “views business and political leaders as far more important than the individuals and societies affected by them.”… (p. 10) As an independent journalists that opposes the state of his profession, he laments the fact that… “90% of Americans rely on information from media outlets owned by only six multinationals, including News Corporation, Comcast and Viacom.”
Conclusion
Disaster Capitalism… pulls no punches in calling out both profiteers and enablers. Loewenstein exposes a shady cabal operating in plain sight; corporations that will not blink at the thought of misery, death and destruction as part of business as usual. Governments that outsource their most distasteful projects to companies that have neither conscience nor boundaries. A complete lack of transparency and accountability allows whatever abuses that are uncovered to yield few consequences for the perpetrators.
The book is impossible to put down and rich with memorable lines. It will have the reader coming back to review the stories of friend and foe, of oppressed and oppressor. Loewenstein has skillfully articulated opposing positions, admitting his ideological bent where possible in the text and to those he meets in the field. It is sure to be a book both loved and hated, depending on the beliefs of the reader, for its honest storytelling. The accounts of his journalistic interactions give the book a very personal feel.
Loewenstein shows us how accepting something terrible (e.g. abuse of asylum seekers, mass incarceration etc.) out of a fear of personal harm, insecurity or loss gives a perceived legitimacy to profiteers (perhaps the American elections will be a case in point of this mechanism, on both sides). He wrote the book to “shock, provoke and reveal.” (p. 16) The question is; once we know all about the profiteers of calamity, will we just carry on or will we fight for justice?

Australia is apparently upset with Israel (or so it seems)