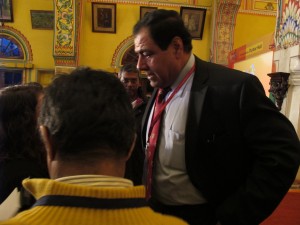 Palestinian doctor Izzeldin Abuelaish is a disarming figure. Born in Gaza and living for years in Israel – he’s now in Canada with his children – his recent tour to United States unleashed a tirade of abuse by The Angry Arab (“he is not very bright” etc).

After spending time with the Dr yesterday here in Jaipur, India at the international literature festival as well as conducting a formal in-conversation with him, it’s hard not to be impressed with his determination and passion. And he’s no apologist for the Zionist state.

He regularly speaks in platitudes, against hatred and violence and in support of peace. During our public talk, I pushed him on some key points. He appeared ambivalent about boycott, divestment and sanctions (BDS) as a way for Israelis to recognise they had to “change” their behaviour (he neither supported it nor directly opposed it). He seemed to have no problem with a one-state solution though his ideal would be a two-state equation. He didn’t believe in talking about “them” and “us” but “we”, a joint existence between Israelis and Palestinians. Such thinking makes a two-state solution hard to imagine. He talked strongly about the reality of occupation in Gaza and the West Bank. He dislikes the major Palestinian parties though says both the PA and Hamas are from the people.

In his book, I Shall Not Hate, he includes a photo with himself and former Israeli Prime Minister Ehud Barak over a decade ago. These days, he can’t even get the Israelis to apologise for killing his kids. “They sent me a letter saying my children were ‘collateral damage’. They were not objects but human beings. This is not acceptable.” He is now suing Israel “because I have no choice, what else can I do?”

Abuelaish cried throughout our session when talking about his children, their loss and how he avoids hating those who murdered them. His Muslim faith helps him. The audience – hundreds of people, mainly Indians and foreigners – were visibly moved and many sobbed with him. I had to hold back tears.

But the Dr is clearly seen as a threat to the Israeli image. Once welcomed into the Zionist state, allowed to work there and move amongst Jews, these days he seems to feel more pity for them. “Even when I was working in Israel, I met very few people who really wanted to understand what us Palestinians were going through.”

I spoke to an Israeli here last night about the session and she said she had felt almost frustration with his performance. But when we discussed why, she revealed that it was simply because she found it hard to understand how he didn’t have more anger towards Israel than he appeared to have. We wondered if he was almost exploiting his children by constantly travelling the world and speaking about their deaths. But we agreed not; for him, it seems to a message that Israelis and Palestinians can live together, if only the politicians left the equation.

I asked the Dr what happens if Israel continues on its current fascist path and increases the pressure on civil society and Palestinians. What happens if more Israeli Jews just don’t care about their Arab brothers and sisters. Surely then, I argued, BDS is really the only way forward. He agreed.

He welcomed the warm response he is receiving across the US during his current book tour. He said that the Jewish Diaspora had to stop the “blindness” towards Israel and “open their hearts”. He believed that many American Jews were doing just that.

Although Elie Wiesel endorses his book – a curious choice of a man who has spent a lifetime caring about many human rights abuses except Israeli oppression – Abuelaish sends a powerful message. Not because I completely agree with everything he says – personally, I don’t see how Israel will ever shift unless it feels serious economic and psychological pain – but hearing an intelligent and articulate Palestinian remains all too rare in the Zionist defending Western media.

Mercenaries are ripe for business

One more step to isolation

One day closer to freedom (from us)