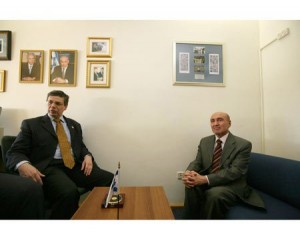 Yesterday (January 11 2010,) Deputy Foreign Minister Dannay Ayalon gave the Israeli public a tangible demonstration of what his Minister, Avigdor Lieberman, meant when he told 150… ambassadors… convened in Jerusalem that “the era of groveling is over.” Ayalon summoned the Turkish ambassador to reprimand him for an instance of non state-sponsored… incitement on Turkish TV. This is what ensued, according to a report in this morning’s Yediot:

“When the ambassador was finally asked to enter the room, his hosts instructed him to sit on a low couch opposite the higher chairs in which they were seated. The hosts, Deputy Foreign Minister Danny Ayalon, Foreign Ministry Deputy Director General for Europe, Naor Gilon, and Ayalon’s office director, David Segal did not smile at their guest and refused to shake his hand. When the photographers suggested a handshake, the Foreign Ministry officials refused. “That is precisely the issue,” said Ayalon. Ayalon made sure that no one could have any doubts that the humiliation of the ambassador was anything but deliberate: “The important thing is that people see that he’s low and we’re high and that there is one flag here,” he said to the photographers.”

Alon Liel, … a former Israeli… Ambassador… to Turkey, wondered on IDF radio this morning where this new school of diplomacy would escalate to next: “ordering the… ambassador… to get on his knees an crawl across the room?”

So, Israel is being run by school children with serious attitude problems.

Just another barrier to peace

Many Israelis Jews don’t believe Arabs should be treated equally