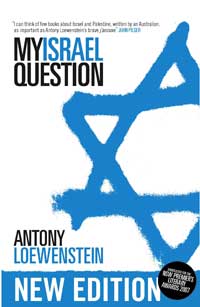 After the huge success of my book, My Israel Question, in 2007, its best-selling status, and ability to generate massive public debate, a fully updated edition is now released:

The undeclared war in the Middle East is the abiding conflict of our era, with little apparent hope of resolution despite years of peace talks. The futile 2006 Lebanon war merely heightened this sense of hopelessness.

On one side of the conflict, Israel asserts the right of the Jewish state to exist in Palestine. On the other, the Palestinian people struggle for survival. Far beyond Israel’s disputed borders, the conflict is replayed in passionate public debate around the world.

Written by an Australian Jew, Antony Loewenstein, My Israel Question was published in 2006 amidst a storm of controversy, critical praise and robust public debate. The Israel-Palestine conflict had rarely been discussed as frankly, an indication that decades-old silencing of dissenting views was coming to an end. Loewenstein’s searching discussion continues here in this fully updated and expanded new edition. Loewenstein’s is an important new voice in one of the most significant debates of our time.