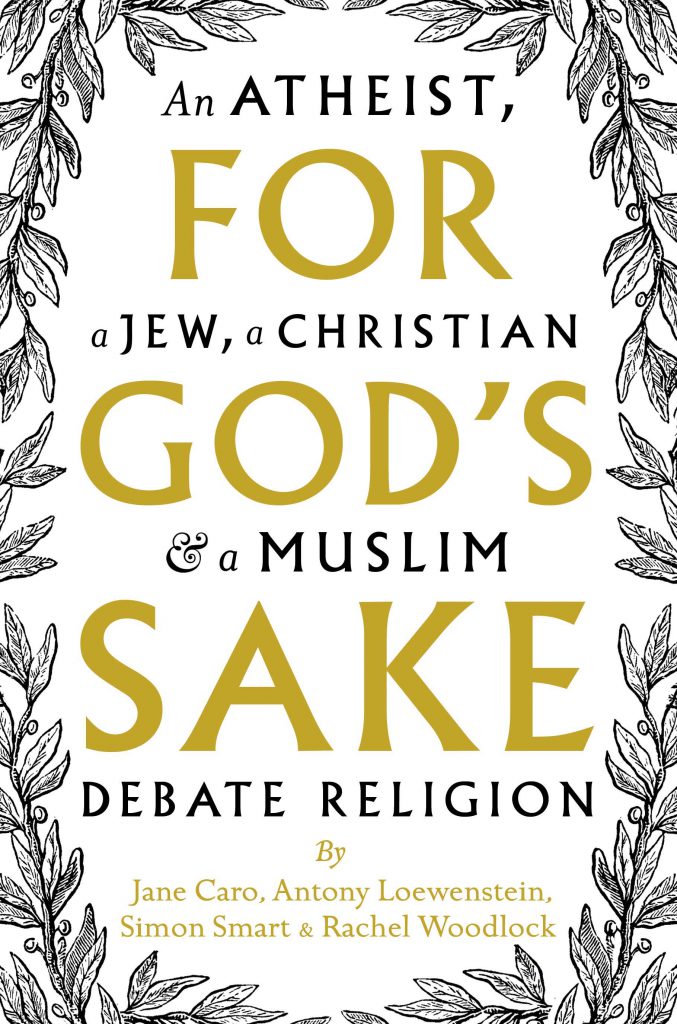 My new book, For God’s Sake, is available from this week through Pan Macmillan. Here’s the blurb:

Four Australian thinkers come together to ask and answer the big questions, such as: What is the nature of the universe? Doesn’t religion cause most of the conflict in the world? And Where do we find hope?

We are introduced to different belief systems – Judaism, Christianity, Islam – and to the argument that atheism, like organised religion, has its own compelling logic. And we gain insight into the life events that led each author to their current position.

Jane Caro flirted briefly with spiritual belief, inspired by 19th century literary heroines such as Elizabeth Gaskell and the Bronte sisters. Antony Loewenstein is proudly culturally, yet unconventionally, Jewish. Simon Smart is firmly and resolutely a Christian, but one who has had some of his most profound spiritual moments while surfing. Rachel Woodlock grew up in the alternative embrace of Baha’i belief but became entranced by its older parent religion, Islam.

Provocative, informative and passionately argued,… For God’s Sake… encourages us to accept religious differences, but to also challenge more vigorously the beliefs that create discord.

I’m very proud of this book because it’s different to the kind of work I’ve often done. To be sure, I discuss the importance of atheist Judaism and my disillusionment with my religion due to Israel’s brutal behaviour towards the Palestinians. Politics isn’t ignored. But all four of us have the chance to discuss and disagree about faith and identity, philosophy and ethics. How do we live a good life? How do we explain “evil” in the world? Doesn’t religion oppress women? And a host of other questions.

I hope you’ll read it and be challenged and provoked.

Welcome to the 20th century