This site has covered the extensive and global efforts by some Zionist organisations to block the performance of the play Seven Jewish Children. The latest example was in Perth, Western Australia

One of the organisers behind the show sent me the following flyer, handed out by Jewish protestors before the program, in an attempt to demonise Palestinians as potential terrorists. Best kill them off, then: 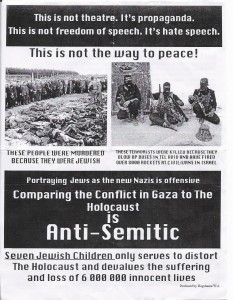 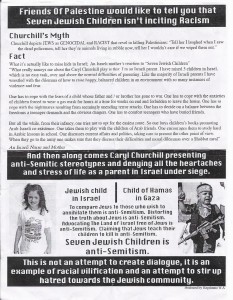 The evening was a resounding success, a full house, an appreciative audience, and a modest contingent of rather sedate protestors. I have attached the propaganda piece they produced to hand out to people in line. What I still find astounding is that they can take offence at [writer Carol] Churchill chastising Zionists for their indifference to Palestinian suffering, yet…  I interpret this nonsense as hate speech. Are they not suggesting that it is wrong to kill Jewish children because they are innocent but the children of Gaza are fair targets as mere terrorists in waiting? I am hard pressed to think of another way to judge the juxtaposition of the images of children. It would be an amusing bit of crude propaganda if they were not so damn earnest. Sigh.