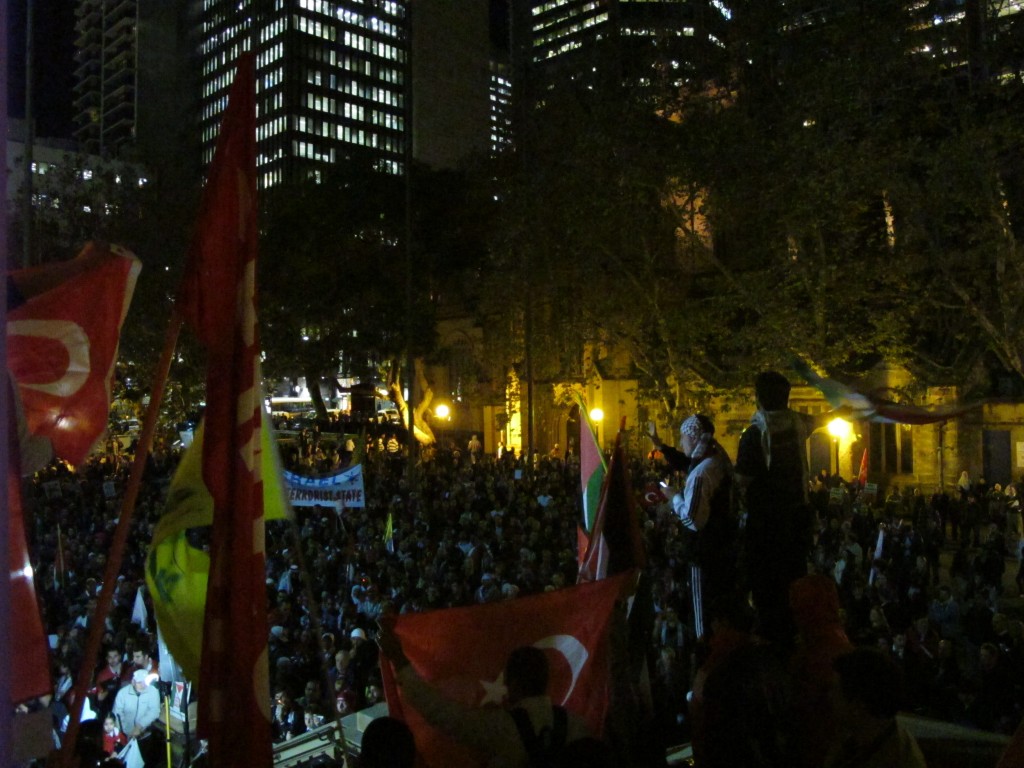 Alongside a huge turn-out in Sydney last night, the group wasn’t just from a Muslim background. I saw some Jews (well, a handful but hey, better than nothing) and many others, including Tamils:

Thousands of protesters from Sydney’s Middle Eastern communities have rallied in Sydney’s CBD over humanitarian aid deaths near Gaza.

The noisy protesters crammed into Sydney Square between the Town Hall and St Andrew’s Cathedral on Tuesday night after the deadly high seas attack by Israeli commandos on a flotilla of aid ships bound for Gaza.

Nine people died in the attack at dawn on Monday, many of them Turkish.

A 20-year-old Australian man has undergone surgery after being shot in the leg.

“Down Down Israel,” protesters in Sydney chanted on Tuesday night.

Many wore black-and-white keffiyeh scarves, a symbol of Palestinian heritage.

Others waved Palestinian flags, while some were draped in Turkish flags.

One of the many banners read “Freedom and autonomy for Palestine”.

A man who only identified himself as Abdullah told AAP he was furious some media had reported the flotilla of aid ships was approaching an Israeli barricade at the time of the attack.

“In reality, they were in international waters,” he said.

The protest was organised by the Social Justice Party and attended by up to 4000 people, organisers said.

About three dozen police watched on.

Sydney Peace Foundation spokesman Stuart Rees urged the crowd to take up their cause with Prime Minister Kevin Rudd and local MPs.

“Ring up Mr Rudd’s office, ring up your local member of Parliament,” he said.

“The Australian government has to find the courage to say no to violence in the Middle East.”

There was a ripple of cheering after NSW Greens MP Lee Rhiannon spoke.

“The Australian Jewish community needs to add their voice to your voice,” she said.

The protest included a march up Bathurst, Pitt and George streets.

Fisk on why Arabs rightly only see bowing down to Zionism