The Australian features yet another “investigation” into alleged anti-Israel bias at universities:

This dispute over academic balance in relation to Israel has been simmering for years on Australian campuses but it is the war in Lebanon that has brought it to a flashpoint. It is a clash that raises raw and sensitive questions about the freedoms and the responsibilities of academe as well as the power of the pro-Israel lobby.

Unlike some recent dishonest attempts by the Murdoch press to slam more critical voices on the Middle East, today’s piece at least attempts to present a variety of perspectives. It should not be forgotten, however, that the journalist of the story, Cameron Stewart, returned from a Zionist-paid trip to Israel earlier in the year and yelped like an over-excited school boy after spending time around Israeli military hardware.

In today’s article, Stewart reminds readers that Zionist lobbyists resent the fact that anti-Zionists are allowed to speak on campus. AIJAC attack-dog Ted Lapkin – quoted from that journal of impeccable record, Quadrant – laughably worries that poor, impressionable students may be exposed to anti-Zionism and “it remains to be seen what effect this indoctrination will have on the next generation of Australian leaders.” Of course, in this twisted worldview, Zionist indoctrination is both healthy and ‘normal.’

Stewart has the insight to write the following:

Australia’s Jewish community is politically conservative – often more so than in Israel – and it has long been frustrated with the inherently left-wing bias perceived in Australian universities. It hopes that this public challenge to the nation’s universities will ultimately lead to less strident criticism of Israel in academe.

But the pro-Israel lobby also risks overplaying its hand and being perceived as using bullying to impose its own agenda. Their complaints inevitably will be interpreted by some as an attempt to muzzle academic debate rather than simply encourage greater diversity of ideas on campus.

Regardless of one’s views on the war in Lebanon, which ended in August, the reality is that the conflict has done great harm to Israel’s international image. This will naturally be reflected in academic studies, just as it has in the media and in mainstream public opinion.

The question is to determine when such views go beyond reasoned argument and into the realm of anti-Israeli bias. The answer, like so many Middle Eastern issues, lies squarely in the eyes of the beholder.

The Zionist lobby resents the fact that more citizens are being exposed to divergent views on Israel/Palestine. They no longer control the agenda, have barely understood the arrival of web-based communication/blogs and simply cannot hide the barbarity and racism that represents present-day Israel. So what do they do? Shoot the messenger, bully the journalist/editor/academic/MP and hope that such pressure will lead to obedience.

Zionists obviously have the right to express their ideas and values. They don’t have the right to try and silence opposing views. That is currently occurring in Australia and much of the Western world and is guaranteed to fail. As world public opinion continues to grow against Israeli policies, many Jewish groups have taken the censoring approach. Exhibit number one: 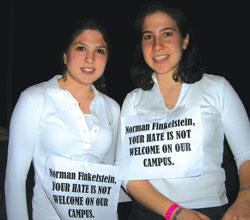 When will the Jewish establishment understand that differing views exist in a democracy? Maybe they should live elsewhere.