The increasing ties between the hard-right and Zionism is clear. Israel has few friends in the world and the far-right loves the Jewish state for its abusive treatment of Arabs and Palestinian. Witness the upcoming visit to Israel by Dutch politician Geert Wilders to speak about creating a Palestinian state in Jordan.

My friend and colleague Reuben Brand was recently in London and sent me the following exclusive information and photos. They really speak for themselves but note the complete lack of outcry by Zionist groups that Jews are now seemingly working alongside fascists. This is what blind nationalism and Zionism has done to my people. Over to Reuben:

Got stuck in the middle of a protest in London a week or so ago. It was outside “Ahava” an Israeli company that basically steals its produce from occupied territories. Loads of Palestinian supporters rallied outside, effectively closing the shop for a couple of hours. But the Israelis were there in force – it would seem that they have now banded together with the EDL (English Defence League) a Neo-Nazi kind of organisation hell bent on ridding the UK of all Muslims. One flag was a combination of EDL along with the Israeli flag with a caption “EDL Jewish Division”; interesting considering such groups were once responsible for mass discrimination against Jews…hmmm. One guy was waving a rainbow gay rights flag and shouting: “No gay rights in Gaza!” “Hamas hates homos!” 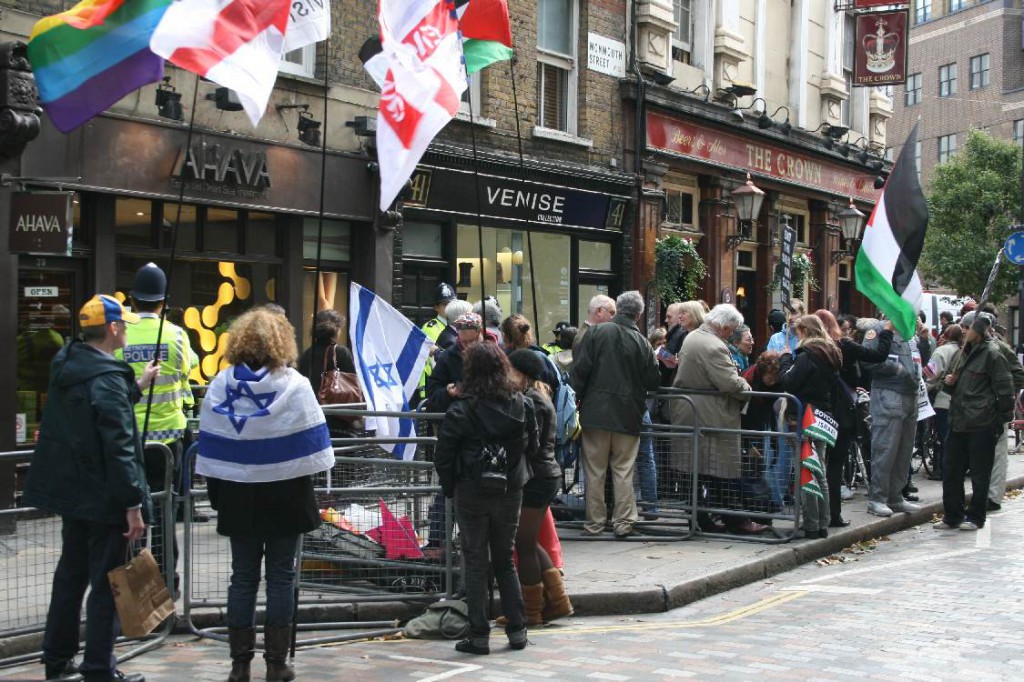 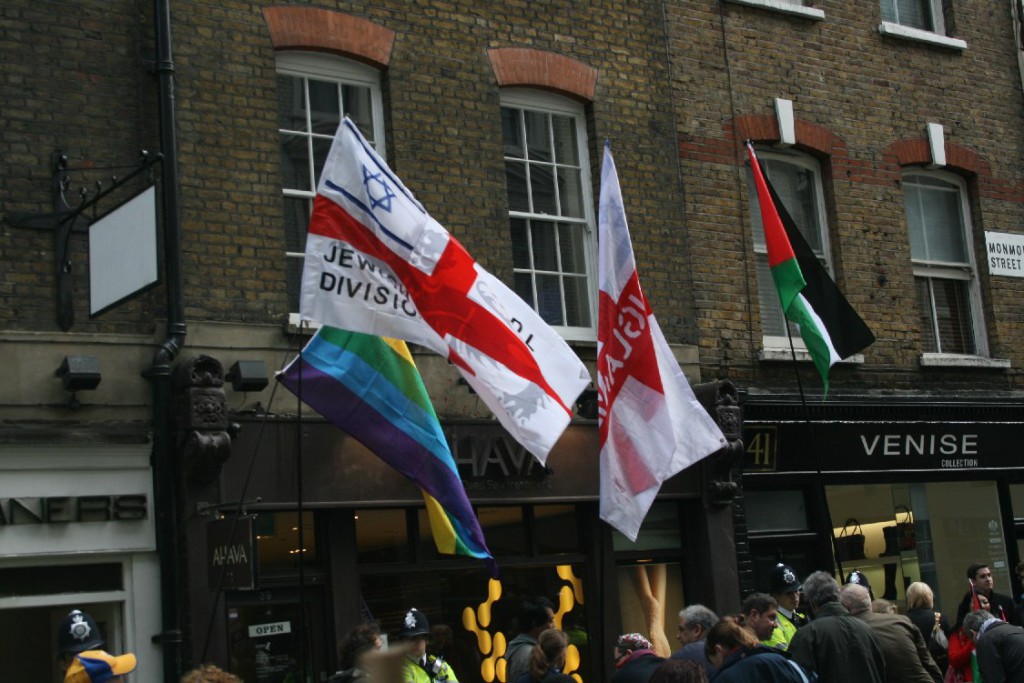 I was approached by both sides at the protest, the pro Israel people gave me a flyer that clearly states the following:

“THE LIE: The protesters claim that Israel oppresses the Palestinians”

“PALESTINIANS: Palestinian terror organisations refuse to recognise Israel’s right to exist and are committed to war against Israel”

“PALESTINIANS: There were regular suicide bombings inside Israel on par with our own 7/7 attacks on the British transport system.”

“ISRAEL: Israel managed to put a stop to suicide bombings with tightened security.”

“PALESTINIANS: Now Palestinian people are being oppressed by their own terror organisations just like the Taliban oppressed the Afghan people.”

“ISRAEL: Israel has no choice but to fight Palestinian terror organisations just like our brave troops are fighting the Taliban in Afghanistan.”

“Sadly, in war civilians get killed. Many Afghanistan civilians have been tragically caught up in the fighting. But the reason for these civilian deaths is that terror organisations like the Afghanistan Taliban and the Palestinian Hamas purposely fight within their own civilian areas. They have no respect for their own people.”

The Palestinian side gave me a flyer also – all the info is on their website: http://www.palestinecampaign.org/

That, along with the slogans that were being shouted out made for an interesting day… It would seem that the EDL has some vested interest in joining forces with this mob…

Re Ahava: Apparently they have made a submission to the Australian Government re petroleum, gas and mineral exploration in the Woomera prohibited areas in SA http://jobs.ahavaresources.com/engineering_&_geology_jobs/mining-&-geology-jobs.html

Building a Nazi-style utopia in Paraguay

The time to speak is now