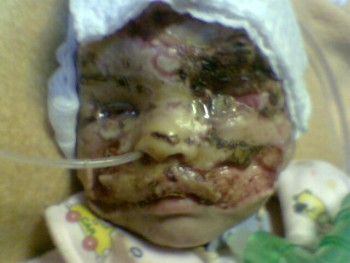 This photo is of a baby girl severely injured (eyes lost) during a recent car bomb attack in Sadr City, Baghdad.

Past all the meaningless rhetoric coming from Washington, London and Canberra, the Iraqi people are speaking loud and clear (if we want to hear them):

More than 90 per cent of Iraqis believe the country is worse off now than before the war in 2003, according to new research obtained by Al Jazeera.

A survey of 2,000 people by the Iraq Centre for Research and Strategic Studies found that 95 per cent of respondents believe the security situation has deteriorated since the arrival of US forces”¦

Nearly 66 per cent of respondents to the Iraqi survey thought violence would decrease if US forces were to leave.

Thirty-eight per cent were also “unconfident” that Nuri al-Maliki, the Iraqi prime minister, would be able to improve the situation in Iraq and nearly 90 per cent described the government’s implementation of its commitments and promises as very poor.…