My investigation in the Guardian: 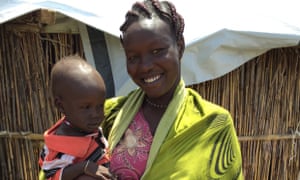 Julia John with one-year-old Tuach, in Bentiu camp. Photograph: Antony Loewenstein
The number of South Sudanese seeking refuge in the UN compound in Bentiu has risen above 100,000, the organisation has announced, making it the country’s largest camp for those fleeing the civil war that has killed… more than 50,000 people since 2013.
South Sudan marked the fourth anniversary of independence from Sudan earlier this month, but the ongoing conflict between forces loyal to the president, Salva Kiir, and rebels supporting his former deputy, Riek Machar, has left little to celebrate.
Humanitarian organisations say they are struggling to cope with the influx of people to the camp, and conditions are grim as the rainy season – which runs… from April to November – envelops everything in thick mud.
With the 100,000 milestone reached, three women living in the camp spoke about how they ended up there – and what they want for the future.
”˜I don’t want to live alongside my enemies’
My name is Julia John (pictured above) and I’m 25 years old. I have three children, one-year-old Tuach, three-year-old Nyachiew and eight-year-old Nyawuora. I’ve been in this camp for 18 months. There was fighting outside my house in Bentiu town and we had to flee. My husband, Henry, is also here. Every day I am cooking, collecting firewood, getting water and taking care of my children. I hope for peace and the guns silenced. I will return to my home but I don’t want to live alongside my enemies.
I was hopeful in 2011, during our independence, for a South Sudan with no killing. I want to tell President Salva Kiir that many people have been killed and we need peace. As a woman in South Sudan, we are suffering because when we try to help our children, men can rape and kill us. When we go to collect firewood near this camp, government troops can get us. We are vulnerable.
I know some women who are getting treatment in Juba [the capital] after being attacked. In this camp, the UN supports us but we need firewood and charcoal because we have to leave this place to find them and that brings risk for us from government soldiers. I hope the UN and NGOs can address this.
”˜We are not free in our own country’ 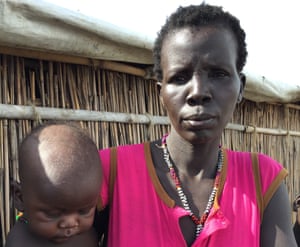 Tabitha Nyakuon Gai, who walked for two days to reach the safety of the camp Photograph: Antony Loewenstein
My name is Tabitha Nyakuon Gai and I’m 36 years old. I’m from the Nhialdin area in Rubkona County. I have six children. I’ve been in this camp for one month. I had to walk two days to get here. My husband is fighting with the rebels and I don’t know where he is. I’ve had no contact with him since September last year. I miss him.
It’s hard to manage kids on my own. My husband fights a just war because the government has killed so many people. Every day I collect firewood and then sell it to make a little money to buy milk for my children.
In 2011 at independence I was happy because I didn’t want to be with Sudan anymore. I wanted to be free. We thought we should be united so it’s hard to believe that we are not free in our own country anymore. Hope disappeared in one minute. I’m worried about my kids’ future – there are no schools, and only the UN gives us food. If the UN leaves, who will feed us?
President Kiir has been in power for 10 years [Kiir served as regional governor before independence] so if I meet him I’ll tell him to leave office. It’s time to give the role to somebody else. Riek Machar has been waiting for so long, give him a chance and then after that Machar can hand over power to somebody else. It’s not right that one person holds power for so long.
”˜Now there’s just insecurity’ 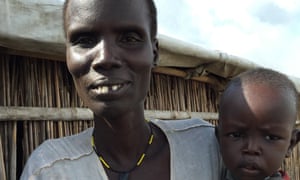 Nyaduop Machar Puot, who has lived for two months in the camp at Bentiu Photograph: Antony Loewenstein
My name is Nyaduop Machar Puot and I’m 37 years old. I have five children. I came from Boau village in Koch country. It took me six days to walk here. My cattle were taken and house burned. I had to flee. I had no choice. A government-affiliated militia attacked me. I saw women and children burned alive in a tukul [traditional South Sudanese home] by militias. When I saw people burned alive I knew I had to leave my village. I saw two people killed like this and they were my friends. My husband is still back in the village. I don’t know if he’s OK. He could not leave with us because he’s an old man with bad legs. I’ve been two months here in Bentiu.
When independence was declared in 2011, I expected there would be services for my kids and now there’s just insecurity. Today I cannot walk freely. I cannot help my children because South Sudan is at war and in a mess.
My message to President Kiir is that your turn is done. Let Machar take over. If Kiir doesn’t agree, both men should leave and not seek power. It’s time for new people at the top.
Compared to life in the village, life in this camp is safer. I still need shelter here because I’m living in temporary housing [her family resides in a flood-prone area of the camp]. The UN tells me it’s coming soon. I hope so because I need to protect my family.

Australian liberal Zionists in turmoil over BDS and morality

How to talk honestly about Gaza: Britain’s Owen Jones on the BBC