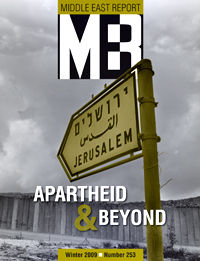 We have used the word “apartheid” to describe Israel’s system of rule over the Palestinians with eyes wide open to the incendiary quality of the term and the uniqueness of the South African ordeal that it automatically evokes. Our purpose in making this comparison is not to shock—we are hardly the first publication to assay it. Rather, we seek in this issue of Middle East Report to stare hard, cold realities in the face and to participate in the discussion about how to transcend them without compounding the loss and dislocation they have already caused.

The hard, cold realities are these: Without a heroic reversal of decades of US policy, there will be no two-state solution in Israel-Palestine. As Oren Yiftachel demonstrates in these pages, the willingness of Israeli leaders to speak of Palestinian statehood has increased in inverse proportion to the chances that such a state will come into being. The advance of the settlement project, the proliferation of physical barriers between Palestinians and Israeli Jews, the cantonization of East Jerusalem and the West Bank, the agony of Gaza—all of these facts stand in cruel mockery of Israel’s stated determination to pursue a comprehensive peace.

The lobby gets a refit