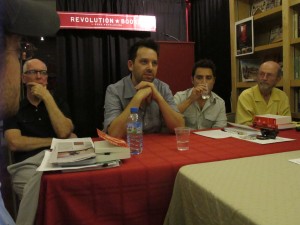 Yesterday’s event at New York’s Revolution Books alongside writer and author Michael Otterman – interviewed today about Iraqi casualties on NPR – was a unique opportunity to discuss Palestine and Iraq. We talked about the hidden civilian trauma, power of the US to wage war with little social cost inside the country, the power of the war and Zionist lobbies and appetite for change.

I was struck by both a frustration and determination of the crowd to not allow a strike to occur against Iran, a real fear, and to find ways to support those at the end of American and Israeli missiles.

The anti-war movement in the US is weak and Barack Obama has captured too many on the Left to remain silent or scared (because the opposition may be far worse.)

But the event yesterday at Revolutions Books showed that growing numbers of people refuse to accept the pro-war sentiments of both the Democrats and Republicans. Peace making is far more difficult.

The Holocaust in Palestine