The following news story and interview, by Rob Bates (photo by Alan Place), appears in this week’s Wentworth Courier newspaper: 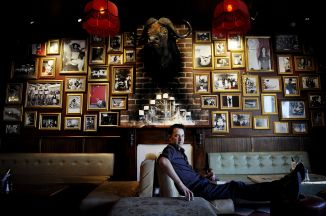 Controversial author, journalist and blogger Antony Loewenstein will host an event at Paddington’s Fringe Bar to discuss internet censorship and the brave few who rise against it.

“There’s a lot of fear in the Jewish community about Israel not being seen as the ideal state and so I was accused of being an anti-Semite, a self-hating Jew and even a Nazi,” he said.

“This hasn’t intimidated me, which was clearly the intention, but inspired me because I know many people want free and open debate on Israel’s behaviour without fear of being labelled.”

For his latest book, The Blogging Revolution, Loewenstein trekked through Iran, Egypt, Saudi Arabia, Syria, Cuba and China talking to dissidents who risked their lives to speak out against oppressive regimes.

As well as telling their frightening and courageous stories, the book assesses the role of major western companies like Microsoft and Google in facilitating internet censorship and persecution.

“These companies do exactly what they’re told and even pre-empt the censorship by blocking things before they’ve been asked to,” he said.

“In the last five years, Yahoo China has handed over information about a number of Chinese dissidents using Gmail, resulting in lengthy prison sentences or worse.”

Admitting that companies working in these countries were “over a barrel”, Loewenstein said more could be done to “push back”. “The head of Wikipedia, Jimmy Wales, recently went to China to meet with senior censorship officials and discuss how they could move toward change,” he said.

“He might fail, he may not change anything but I applaud him for starting the dialogue.”

Loewenstein said it was critical for Australians to be aware of the push for tighter censorship in our own country and demand a greater diversity of voices in our media.

“I’m not saying that blogging is about to replace mainstream media but I definitely think it will have a greater role in the shifting structure,” he said.

“More and more I think people are craving independent, alternative information and are frustrated that they’re not getting it from mainstream media.”

And we wonder why the Jewish community is so sick

Gaza needs yet another barrier to freedom, clearly