The current issue (Issue 44 Nov/Dec 2011) of Frankie magazine, a magazine aimed at young Australian girls, has on the back page a full page advertisement headed “Israeli Girls”: 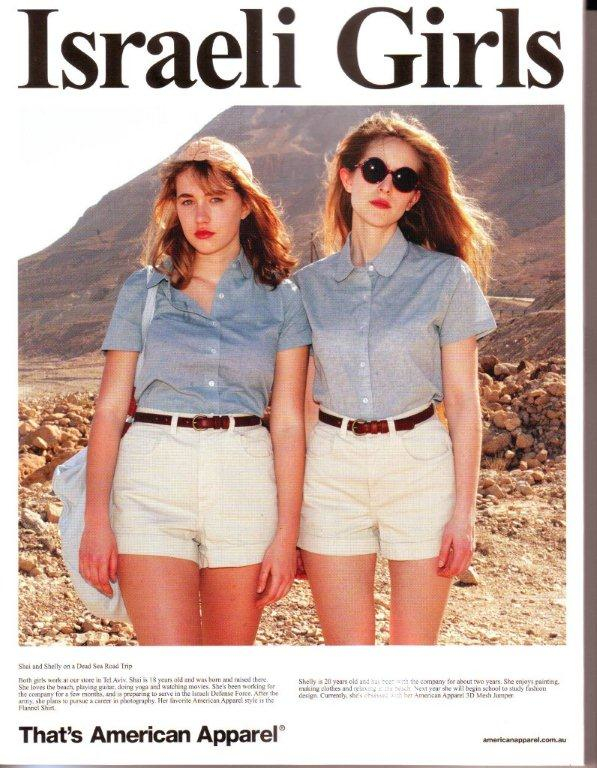 Shai and Shelly on a Dead Sea Road Trip

Both girls work at our store in Tel Aviv. Shai is 18 years old and was born and raised there. She loves the beach, playing guitar, doing yoga and watching movies. She’s been working for the company for a few months, and is preparing to serve in the Israeli Defense Force. After the army, she plans to pursue a career in photography. Her favorite American Apparel style is the Flannel Shirt.

Shelly is 20 years old and has been with the company for about two years. She enjoys painting, making clothes and relaxing at the beach. Next year she will begin school to study fashion design. Currently, she’s obsessed with her American Apparel 3D Mesh Jumper.

Such advertisements play a key role in glamourising/normalising Israel and the IDF while, almost subliminally, linking Israel with the US. Occupation, violence or racial discrimination are ignored.

Write to the magazine’s editor (Jo Walker: [email protected]) telling her that such material shouldn’t fool the readers and depoliticise Israeli actions.

Cairo is poor and needs reliable “friends” to keep it afloat

How to get paid to write about settler madness