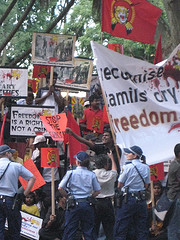 This afternoon I attended a rally in Sydney city to protest the Sri Lankan government’s brutal campaign against the Tamil people (my photos here). Like the struggle for Palestine, many Western government ignore the plight of groups not deemed important to Western interests. Terrorism is often the reason given for not offering support but, in reality, Palestinians, Tamils and Tibetans, amongst many others, have little choice but to resort to various means to draw global attention.

Resistance to occupation is legitimate.

From the Sydney Morning Herald online:

A block of Sydney’s CBD has been shut down in peak hour as about 1000 people staged a sudden protest over the war in Sri Lanka.

It is understood the demonstration was organised by Tamil youth groups after fighting between the Sri Lankan Government and the Tamil Tigers intensified in recent days.

The protest on Elizabeth Street next to Hyde Park shut down a block of the city between Market Street and Park Street as about 50 police officers formed a line in front of the demonstration.

The protesters shouted “freedom”and flourished hundreds of red banners, some stating: “The charge is genocide, the struggle is for freedom.”

A spokeswoman for Australia’s Tamil Diaspora, Dr Sam Peri, said the protest was against the mounting casualties caused by the Sri Lankan Government’s war against the Tamil Tigers in the north.

She said the decision to protest had been a spontaneous one.

“It literally got organised overnight,” she said. “This morning SMS, emails and phone calls went out … people said we need another rally because already this year 3500 Tamil civilians were killed because of the Sri Lankan Government’s bombing.

“Today is to urge Australia to use their diplomatic power to push Sri Lanka to enter into a ceasefire.”

She said the Sri Lankan Government, which had turned “a deaf ear” to ceasefire requests, was “conducting a racist war against the Tamils and we call that genocide”.

She alleged that cluster bombs and white phosperous were being used against civilians, in breach of the Geneva Convention.

We are all refugees and will always be

Anybody else like to speak out against a courageous academic challenging Israeli apartheid?

If I ruled the world