My 2008 book The Blogging Revolution detailed the role of internet censorship in non-democratic nations and Western firms assisting repressive regimes monitor the web. It was released in an updated e-book edition in August and focused primarily on the Arab revolutions.

I’m proud to announce it’s now being released in an updated print edition in India, the world’s largest democracy. One of the country’s leading publishers, Jaico, is spreading the word across the country. Here’s the new front and back cover: 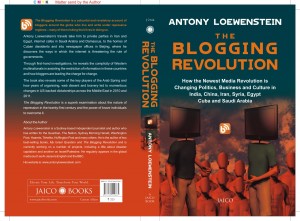 I hope at least one billion Indians take a read (as I feature content about growing internet censorship in their country).

Blood, drama, chaos and defiance on the streets of Iran

How the CIA funds Afghan corruption

Imperialism with a new face is still imperialism