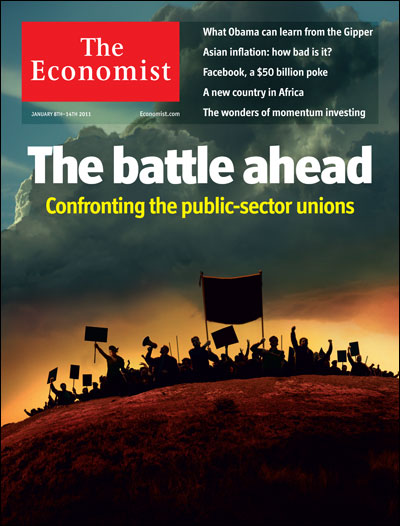 A charming cover that speaks volumes about the obsessive love of privatisation in the corporate media. The cost to people’s lives is irrelevant; it’s all about “efficiency”.

The Economist doesn’t seem to understand that you can’t actually run the public sector exactly like the private sector. You are not meant to and you cannot. Then again, it only wants a public sector in name, a small one at that.

The number of cliches and assumptions peddled in this edition borders on the ridiculous. Strawmen are invoked such as public sector unions opposing improved services and productivity and the left not really wanting an efficient state sector. They are bad caricatures. No one actually opposes better services and more productivity, not even the public sector unions, and the left is not opposed to an efficient state sector.

The difference is that The Economist is ideologically wedded to the view that improvements can only come through “competition” and “flexible conditions” ie large gaps in pay and conditions. It fails to cite any real world evidence. The reality is that what it suggests will, in many cases, increase costs and won’t improve outcomes when what is actually needed is better co-ordination and a more wholistic approach to avoid siloed responses.

By referring to public servants as “tax-eaters”, The Economist clearly shows its utter contempt for the public sector. The absurd and baseless accusations published reeks of an agenda to dismantle the public sector even further and attack public sector trade unions by demonising them and blaming them for all societies ills. Unfortunately since it’s The Economist, many will take it as gospel despite evidence to the contrary.

Don’t sleep in on November 4

Waiting on Obama is a fool’s game