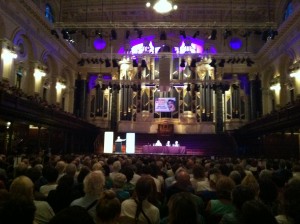 Last night’s large event in Sydney to support the right of Wikileaks to publish material was a huge success. Thousands turned up to hear speakers chastise the Australian government for shamefully bowing down to America’s wishes over Julian Assange.

A high-profile human rights lawyer claims Julian Assange’s only crime is embarrassing the US government and if America doesn’t want to be embarrassed it should “stop doing embarrassing things”.

Supporters of the WikiLeaks founder packed Sydney’s Town Hall last night to hear Julian Burnside QC and others denounce the treatment of the whistleblower website and the Australian-born Assange at the hands of the Australian and US governments.

A panel which included journalist John Pilger and federal MP Andrew Wilkie, a former intelligence analyst and Iraq war whistleblower, said the saga has followed a narrative similar to that of former Guantanamo detainee David Hicks.

“Like Julian Assange, he’s a courageous Australian citizen who was denied the help of his government,” Pilger said of Hicks, who attended the event.

Wilkie expanded on the theme, comparing Assange to Mamdouh Habib, another ex-Guantanamo inmate, and Allan Kessing, who blew the whistle about inadequate security practices at Sydney Airport.

Wilkie described the heavy price he said he paid for challenging the Howard government over their case for war with Iraq in 2003.

“Julian Assange is going through the whistleblower grinder ”¦ and my experience is that when you stand up and try to speak the truth to power it is tough. “For my efforts you were told that I was mad,” said Wilkie, adding that whistleblowers commit suicide at a higher rate than the rest of the Australian population.

Burnside said a successful prosecution of the accused WikiLeaker Bradley Manning, a US Army private, is unlikely to have any impact on whistleblowers coming forward in the future.

“The First Amendment right of free speech in the US means that the publication would not be an offence, even though the leaking was an offence and the only exception to that ”¦ is if the leaking creates a real and present danger and there’s no suggestion of that in this case,” said Burnside, responding to a question from ninemsn.

The panelists and moderator, former SBS presenter Mary Kostakidis, were all adamant in their view that WikiLeaks has a role to play in an open and democratic society.