My following article is published in this week’s Time Out Sydney magazine:

In the years after September 11, 2001, I was constantly frustrated by the failure of the Western media to examine the real reasons behind the attacks. It was as if only a Western journalist’s filter was allowed to see the post 9/11 world. From the hills of Afghanistan to the deserts of Iraq, I constantly waited to read indigenous voices from these conflict zones. They rarely came.

The internet has revolutionised the ways in which the world communicates, does business and dissents. In Western societies, such advances are irreversible but what about the rest of the planet? In 2007 I visited Egypt, Iran, Syria, Saudi Arabia, Cuba and China to examine how the net was challenging authoritarian regimes, the role of Western multinationals such as Google, Yahoo and Microsoft in the assistance of web filtering and how misinformed we are in the West towards states considered “enemies” or “allies”.

I spoke to writers, journalists, politicians, dissidents and citizens to gauge attitudes towards social and political issues in their countries and what they really thought about taboo subjects. Blogs, websites and online forums prove that state-run media are usually little more than propaganda-producing outlets. In many places, therefore, online media is the only space to find quality and reliable information. 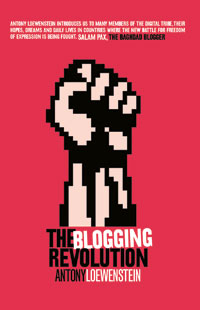 Across the world, young generations are challenging tired state media by writing online about politics, sex, drugs, relationships, religion, popular culture and Brad Pitt. From female Egyptian activists opposed to female circumcision to outspoken, pro-Western women in Cuba, people are being empowered by new technology to create spaces away from the prying eyes of meddling authorities.

My book, The Blogging Revolution, is more conversation than definitive statement. As Western media struggles to adapt to a web future – ironically enough, sales of print media are rising in many non-Western states – it is vital to examine the shifting relationship between reader and writer and journalist and consumer.

In the non-Western world, however, as I extensively examine in the book, expectations towards transparency and democracy are different and necessarily so. Blogs are one way to gain insights into these worlds, away from our current obsession with “terrorism.”

Democracy in Cuba? Not any time soon