A senior Israeli diplomat has called on Australian Jews protesting against Israel’s military action in the Gaza Strip to visit the conflict zone and see the Israeli people’s suffering for themselves.

More than 120 prominent Jewish Australians, including anti-Zionist author Antony Loewenstein and Greens MLC Ian Cohen, called for an immediate end to the war against Hamas.

In a statement co-ordinated by the group Independent Australian Jewish Voices, they described the conflict as “inhuman, superfluous and abominable” and said the assault on Gaza would “only inflame hatred of Jews and of the state of Israel”.

By Tuesday morning, at least 60 civilians were among at least 530 Palestinians killed in the current conflict, which began on December 27 with Israeli air strikes and escalated when Israel sent ground troops into the Gaza Strip on January 3.

It is understood a number of Eastern Suburbs locals are currently serving in the Israeli army and at least one is on the ground in Gaza.

The deputy chef de mission of the Israeli Embassy, Eli Yerushalmi, said his country would continue its assault until Hamas stopped firing rockets into Israel.

He said Hamas had fired more than 8000 rockets and mortar shells into Israel in the past eight years.

“There is no country in the world that would absorb this kind of situation,” Mr Yerushalmi said. “This is something we cannot tolerate and we have a right under international law to simply defend ourselves against these terrorists.”

To the Australian Jews opposing the war, he said: “It’s very easy when you’re outside to say ”˜Israel is exaggerating; what is Israel doing?’ Israel is doing something that any normal country in the world would do – simply, defending civilians against an enemy which wants to destroy you and erase you.”

There have been no public rallies in support of Israel in Sydney, but about 2000 people attended a demonstration against Israel’s military action on Sunday. A pro-Palestinian rally in Melbourne on the same day drew about 3000 people, while 500 attended a pro-Israel rally.

Mr Yerushalmi said protesters at rallies against Israel were predominantly Arab and their demonstrations would not influence the country’s operations.

“Every time there is something in the Middle East, they will demonstrate about Israel. Not because Israel is now acting in Gaza, but because they don’t want to see Israel alive at all,” he said.

Prime Minister Kevin Rudd said on Monday that Australia recognised Israel’s right to self-defence but he called on Israel and Hamas to seek a diplomatic solution to the conflict.

Mr Yerushalmi said Australia had shown understanding for Israel’s actions because “Australia, being a Western country, understands very well that no country on earth can actually tolerate a situation in which its citizens are rocketed.

“Like Australia, Israel also hopes that we will reach a ceasefire, but this ceasefire has to be different from cease-fires in the past.”

NSW Jewish Board of Deputies chief executive Vic Alhadeff said the loss of life in Gaza was “deeply regrettable”, but it arose after Hamas had fired more than 6000 rockets into Israel from Gaza in the past three years and failed to renew the most recent ceasefire.

The Executive Council of Australian Jewry said the Australian Jewish community supported both Israel’s actions and Palestinians’ desire for an independent, democratic Palestinian state. The council also said every civilian casualty – whether Palestinian or Israeli – was “a true tragedy”.

Accompanying the article is the following photograph of NSW Jewish Board of Deputies head Vic Alhadeff. Yes, Zionist lobby, only you speak for Jews: 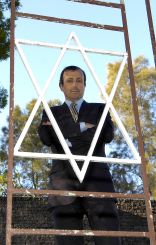 The kind of ally we should not have

What on earth has happened to my people?