Early this morning, Jewish activists in a historic first in Los Angeles, chained themselves to the entrance of the Israeli Consulate and blocked the driveway to the parking structure, blocking all traffic in and out of the building. “We sent a clear message to the world that LA Jews are part of the global majority in opposition to the Israeli siege of Gaza,” said Lenny Potash a 72-year old protester who was cuffed to eight other activists, blocking the driveway to the consulate. The activists were joined by 50 other supporters and who chanted “LA Jews say, End the Siege of Gaza” and “Not in Our Name! We will Not be Silent!” Protesters also held up signs reading “Israeli Consulate: Closed for War Crimes.” 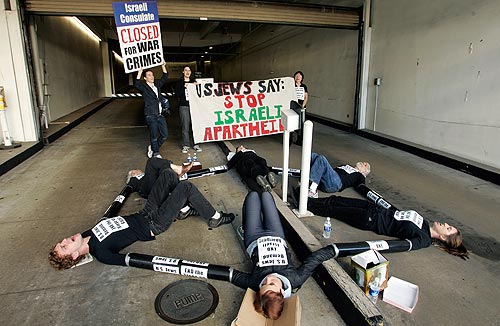 Here you are, liberal Jews, BDS is for you