So much of the Western press refuses to publish the most gruesome images of our wars (must protect the kiddies, of course) but it’s encouraging that some are not shying away from our complicity: 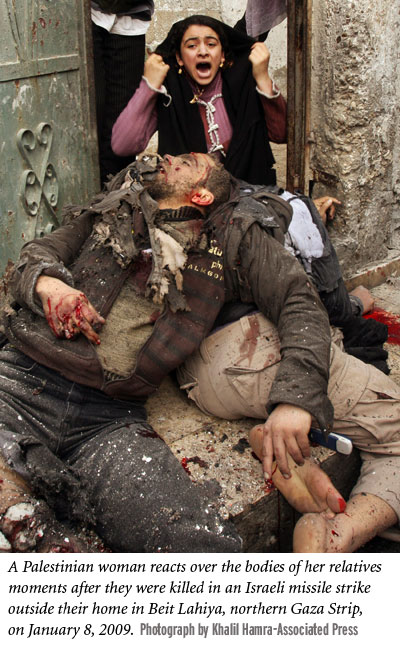 Photojournalist Khalil Hamra of the Associated Press is the winner of this year’s Robert Capa Gold Medal Award from the Overseas Press Club for his powerful photographs, “War In Gaza.”

“Hamra’s pictures of the Israeli military incursion into Gaza showed exceptional courage and enterprise by a committed local photographer during a sustained and highly dangerous conflict,” OPC judges said of their selection.

“This is a big honor,” Hamra told News Photographer magazine when he arrived in New York City this week. “When I got an eMail from the AP office in New York saying that I had won the Capa, I had to ask them three or four times, ‘Is this a joke?’ I could not imagine that I would win this, it was a very big surprise. The first thing I did was to call every one of my colleagues and tell them. They could not believe it either.”

The Robert Capa Gold Medal Award is given by the OPC in recognition of the “best published photographic reporting from abroad, requiring exceptional courage and enterprise.” It honors the legacy of the great war photographer Robert Capa of Magnum Photos.

The award will be presented to Hamra tonight at the OPC’s annual dinner in New York City, emceed by Kimberly Dozier, the AP’s new intelligence reporter and a veteran correspondent who was injured in Iraq four years ago.

“His images are close up, powerful and direct, and taken at considerable risk due to the nature of the conflict which had combatants mingling amongst the civilian population,” OPC’s judges said. “Hamra’s personal circumstances are equally compelling: he covered the conflict in spite of concerns about the welfare of his wife, then pregnant with twins.” [Two healthy boys were born later.]

Born in Kuwait in 1979 to Palestinian parents, the photojournalist grew up in Qatar, Egypt, and Palestine. He’s a 2001 journalism graduate of the Islamic University in Gaza and in 2002 he began freelancing for AP. His work was included in a group exhibit “The Intifada” at Visa pour l’Image in Perpignan in 2004.

In New York for the OPC awards dinner, Hamra reflected upon his Gaza images. “These people are my people,” he told News Photographer magazine. “When I was photographing the girl screaming over the bodies of her relatives in front of a house, that was very shocking. I was thinking at the time of my mother, of my family, of my wife. I was always thinking, ‘I don’t know these people, but what if I am shooting and I see one of my family? Someone I know?’ Too many of these pictures I shot through heavy tears.”

He says that in the nine years he’s been shooting pictures in the Gaza for the AP, he’s been “shooting bloody pictures of incidents for much of that time, but this was different. It was a continuous catastrophe for 22 days, non-stop bleeding. It was very, very hard. In the beginning of my career if I had to go to a hospital morgue and shoot a picture of a baby, I couldn’t manage. But this war changed everything.”

Hamra said that covering a war is a very different experience when it’s being fought on your own soil, and not in some far-away foreign land.

“When you’re covering a war in some place where you don’t live, across the world, it’s something you’ve chosen, you picked it, you decided to go. But when the war comes to you, it is completely different. When it is in the place where you live, you have to do it. I covered the Gaza from one side, from the inside, so that every single shot is in some way about my people, the victims, and that affects me a lot. To be honest, it was like we were stuck … no one could come from the outside to help us. From my place I did my side, and outside the others did their side. We worked hard, but at the same time we were looking for help and support from people outside.”

“Wars should never be forgotten,” Hamra said. “When you are in the middle of a war as a journalist, or a photographer, or a soldier, it affects you. When you are in the middle of the blood and the victims and you might be one of them, that also is not easy. Wars are the same everywhere but the difference is if you are a citizen or one of the locals and you face war in your own country. I am just thankful that I could do something, something with my cameras.”

The photojournalist’s boss at the Associated Press shared in the OPC judges’ praise for Hamra. “I’m delighted that Khalil won the Robert Capa Gold Medal,” AP’s director of photography Santiago Lyon said this week from Paris. “His work demonstrates yet again that local photographers are becoming increasingly valuable to international news organizations and in the case of this story, essential. Foreign journalists were largely blocked from entering Gaza to cover the key phases of the conflict.” Hamra is based in Rafah and generally covers the southern Gaza Strip.

And Israel wonders why it is so hated

Lying is clearly good for business

We’re Jewish and we would like to ban this