Yesterday I attended a 2000-strong march in Sydney against Israel’s behaviour in Gaza.

Some people marched under a Hamas flag, some under a Hizbollah flag and many, such as myself, simply as an individual outraged by the Jewish state’s typically stupid action against the Palestinians. Some other Australian Jews are thankfully speaking out: 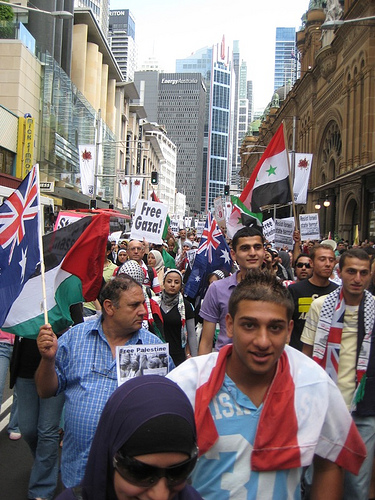 Israel’s attempted end game, articulated by Jennifer Loewenstein (no relation), is the following:

“HAMAS””¦ the word that, in this case, renders any action taken by the other side, no matter how barbaric or sadistic, legitimate. Couple any noun with the preceding adjective “Hamas” and it will be immediately quarantined as if tainted by some infectious bacteria. This is how to dehumanize a million and a half people overnight; how to render them different from us and dangerous to us.…  While it is true that a poll showing what the average American knows about Hamas might be cause for concern; a poll showing what the average elite-educated American knows about Hamas would reveal immediately how effective voluntary indoctrination in democratic societies has become and why those with the power to stop crimes against humanity overnight refuse to do so even after they understand that what they’re doing is wrong.

Brazil is unwilling to normalise relations with Israel