With all the talk about Marrickville council embracing BDS in Sydney, Palestinian voices have been largely absent. Like in so many debates about the Middle East in the West, all we hear are Zionists and Zionists. 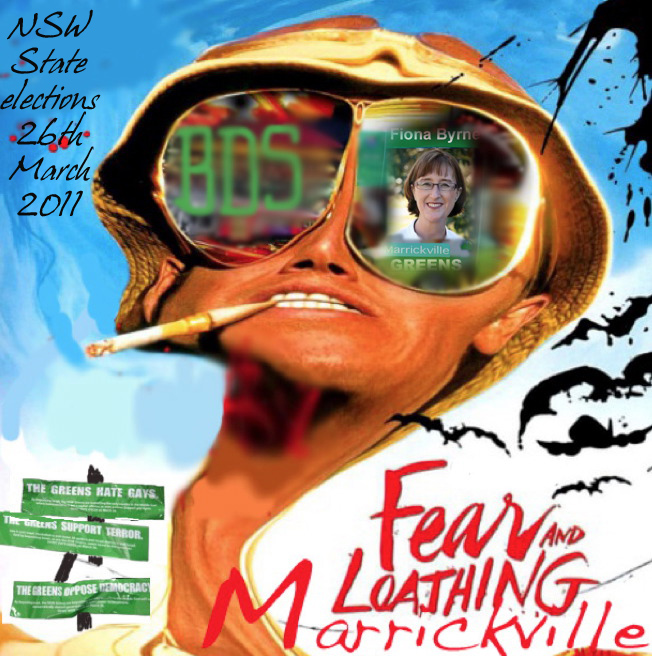 It appears that once again the pro-Israel apologists have decided to single Israel out by making boycott, divestment and sanctions (BDS) against Israel a leading issue for the Marrickville electorate in the lead-up to the NSW state elections. Not surprisingly, the Palestinians are rendered invisible again as right-wing groups, politicians, the pro-Israel lobby and the Murdoch Press attack the Marrickville Council for their resolution to support BDS. That Palestinians living under Israel’s 43-year-old occupation are being ethnically cleansed on a daily basis from their land, their neighbourhoods and farms seems to be of no concern to our Liberal and Labor candidates who are vying for seats likely to favour the Greens.

The call for BDS was initiated in 2005 by Palestinian Civil Society as a form of non-violent resistance that is rooted in international law and the universal declarations of human rights. … It aims to empower individuals to take action to end the conflict. Since 2005, BDS has had a steady rise in popularity amongst Palestinian and Jewish peace groups only to accelerate in 2009 when Israel attacked the Gaza Strip. The deliberate sidelining of the Goldstone report in the UN after the evident savagery of the assault, galvanized organizations and individuals around the world to join the BDS campaign and call for an end to Israel’s criminal impunity and disregard for international law.

In the run up to the NSW elections, none of the politicians gave a thought to Israel’s new round of attacks on Gaza. … Nor did the media, despite Israel’s opposition leader Tzipi Livni calling for another “Operation Cast Lead” with the same chilling indifference she showed when she defended the earlier offensive as “necessary”.

Instead, a smear campaign was waged against the increasingly popular Greens for their principled support of BDS, a call coming now from numerous mainstream organisations around the world, including a good number of unions here in Australia.…  Besmirching the good character of Greens’ candidates like Marrrickville Mayor Fiona Byrne, who is standing for the seat of Marrickville, as well as distributing false and sensationalist propaganda for political advantage, ought to sound warning bells for the local electorates and Australians generally.

If Ms Byrne is indeed an “extremist” then she is in illustrious company. … … Nobel Peace Laureates Desmond Tutu and Nelson Mandela, as well as former US President Jimmy Carter, were also labelled “extremists” by blind supporters of Israel, for daring to criticize Israel’s systematic discrimination and violations of International Humanitarian Law.

Nevertheless, as Israel expands its Jewish-only colonies, pushes its indigenous Palestinian population behind razor wires and tall cement walls, and strips them of any shred of freedom or dignity, our politicians continue to reward Israel.…  A resolution moved by Liberal Senator Fifield condemning Marrickville’s decision to implement a boycott was just passed in the Federal Senate. … The Greens were the only ones who opposed it.

The resolution acknowledges the friendship between Australia and Israel and this is no surprise at all since successive governments here in recent times have bent over backwards to embrace Israel.

Notwithstanding our politicians’ blind support, Australia’s relations with Israel have caused many Australians to question what business we could possibly have with a state that is entrenching its occupation of another people. … … There is a growing recognition amongst Australians that Israel simply does not live up to its tired and discredited mantra of “the only democracy in the Middle East”.

The idea that Israel is a democracy like Australia is simply not valid. … You cannot deny the rights of half of the people living under your control and still be called a democracy. … As if that is not enough, Israel has now made it illegal to hold events or ceremonies commemorating Israel’s Independence Day as a day of catastrophe or “Nakba” for the Palestinians dispossessed of their homes and land in 1948. … And the Israeli Knesset has just passed a segregation bill, which prohibits Palestinian Israelis from living in Jewish localities built on land confiscated from them.

In light of such blatant discrimination, the call for BDS is neither extreme nor unrealistic. … More and more people around the world see it as a morally sound strategy for holding Israel to account. If anything, the spectacle of fear-mongering and name calling in Marrickville has shown how incapable some politicians are of having a rational conversation on Israel/Palestine, despite its importance to world peace and security.

Samah Sabawi is a Palestinian-Australian writer, playwright, producer, political analyst, commentator and public speaker on human rights and is the Public Advocate of the Australian advocacy group Australians for Palestine.

Sonja Karkar is the founder of Women for Palestine and the editor of the Australians for Palestine news website. … Her articles have been published in Australian and overseas publications.

How many Hitlers are there in the world (Zionists need to know now)?